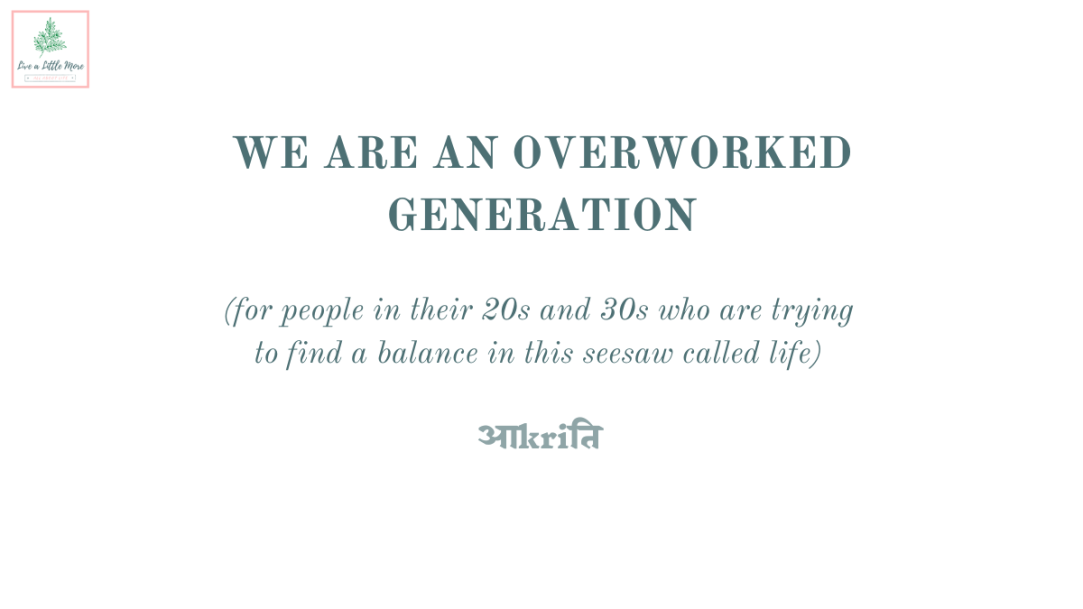 We are an Overworked Generation

I gave a lot of thought to how to begin writing this piece. Not because I didn’t find the right words, but because I struggled with too many opening thoughts as someone who belongs to this generation.

I could begin by asking you to slow down and live in the moment, but who am I kidding? I am just as guilty as anybody else for not appreciating the harmony of living in the moment because truthfully, we aren’t groomed for that. It would be hypocritical of me to preach to you something I struggle to practice myself.

We are a generation that sees exhaustion as a symbol of pride and success rather than of overburdening, unimaginable pressure that is hard to deal with.

If you are not constantly doing something, if you aren’t always busy, if you aren’t occupied with a plethora of work, then you are not hustling enough. Hustling has become synonymous with success, if not with success, at least with our worth. Even if it means over-tiring and stressing ourselves to prove to the world that we are capable of that success.

Can we blame ourselves, though?

In this competitive world where people are constantly losing jobs, we must keep proving ourselves. However, our need to be better than everyone else is one reason we suffer so much. We are in this constant rat race to prove ourselves to the world. We avert our eyes from what should be important for us. We are an overworked generation and I don’t mean just our jobs.

Our lives are not just defined by the happenings in our small world, but by the ones that live thousands of miles away. Even though social media has brought us closer to people, it has also been our enemy.

We struggle to let our emotions out because we fear being judged. We hesitate to be our true selves because we want to fit in, even if it means playing pretend.

We answer work calls even late at night or on holidays because we don’t want to come across as incompetent.

We indulge in hook-ups and one-night stands because we don’t have the bandwidth to let love in because it hurt that one time.

We fail to understand the complexity of our feelings and emotions, dealing with issues that are hard to comprehend because our minds are never at peace. The happenings in the world do not make it any easier either.

We are navigating between two generations –

One that is too cool for us to fit into and the other whose ideologies we cannot fathom agreeing to.

We are constantly struggling between accepting what the world wants for us and what we want for ourselves. We are fighting battles with the world on the outside, whilst fighting wars in our heads.

We, unfortunately, find it hard to take breaks. We term our much-needed rest duration as procrastination.

How did we end up being a generation that could find joy in the little moments in their childhood to the ones struggling to be happy?

We should not be reduced to a generation that only looks fun on social media but is struggling to find moments to genuinely smile.

Will it be possible to slow down and enjoy the moment before it passes by?

Before we begin to run from it?

Before our worries engulf us again?

Before we surrender to become our enemy?

I hope it does one day.

Writing about things that I passionately believe in to live a more healthy, peaceful, sustainable life 🌱 View all posts by Aakriti Shah

All About Life Chapters